Plant a tree in memory of Brian
An environmentally-friendly option 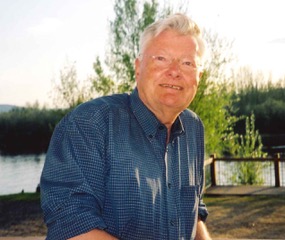 1934-2021 ~ With great sadness the family of Brian Hargreaves announce his passing on March 26 th 2021. Brian was born on December 17, 1934 to Alice and Reginald Hargreaves and raised in the town of Guisborough Yorkshire England.
Educated at Guisborough Grammar School for boys, he loved the years spent there, and where he developed a love for chemistry. He then studied inorganic Chemistry and took his HNC at Constantine College Teesside Yorkshire. He then got a position with ICI Wilton division.
In 1959 he married his badminton partner Beryl and by 1963 they had daughter Linda and son Stephen, in 1964 he was offered a position with Polymer Corporation in the chemical valley SARNIA Ontario and in May Brian and his family emigrated, and in 2 days he was working and was the beginning of a new career in the Chemical industry, he worked in the labs and Research and development.
In 1966 they built a new house and by 1968 children Paula and Andrew were born.
Polymer became Polysar and Brian travelled to Wiesbaden to the company’s operations in Germany and also tech service across Canada. He was transferred nearer Toronto and the family settled in Cambridge Ontario and eventually Nova Chemicals took over the Polysar company and by now Brian was a specialist in his field and in 1985 he won a President’s award for his work in Polystyrene and with his knowledge of ABS products. He travelled regularly to Nova chemicals Leominster division in Mass. USA and was a frequent flyer to Calgary and technical support for other Canadian customers of the products.
After spending 44 years total in the chemical industry Brian retired in 1995. Brian was honoured by 2 retirement dinners by Nova Chemicals one in Leominster and one in Toronto.
In 1997 Brian and Beryl arrived in Qualicum Beach to start a well earned retirement and for Brian to enjoy his golf. Brian was a 22 year member and president 2005 for Qualicum Beach PROBUS club. He loved and was very proud of Linda, Stephen, Paula and Andrew and his 6 grandchildren and 2 great grandchildren.
There will be no funeral but a celebration of life with family once they can travel to BC. You will be missed Brian…….

Plant a tree in memory of Brian by clicking here.
To send flowers to Brian's family, please visit our floral store.

A service summary is not available

Plant a tree in memory of Brian
An environmentally-friendly option

Plant a tree in memory of Brian

1 tree planted in memory of Brian

We remember Brian fondly as one of our 'cheekiest' friends at Polysar. He was a man of great wisdom and a dry, dry wit! Beryl, Linda, Stephen, Paula and Andrew, we are so sorry for your loss and hope your many wonderful memories of your father will always bring a smile to your faces. Love to you all...Michael and Kim Trottier

A Memorial Tree was planted for Brian Hargreaves

We are deeply sorry for your loss ~ the staff at Qualicum Beach Memorial Services Ltd.
Join in honoring their life - plant a memorial tree

Plant a tree in memory of Brian